A new forecast on battery storage growth in Australia has predicted an additional 800MWh of utility scale batteries installed or in construction by this time next year, and almost as much battery installed behind the meter by the end of 2018. 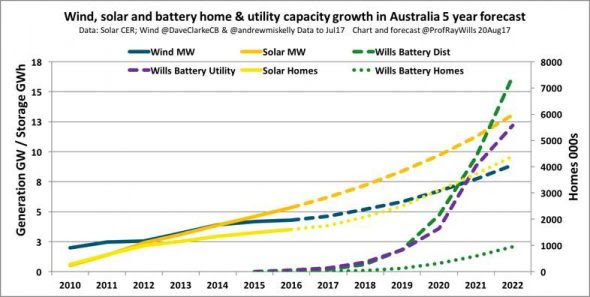 Wills contends that, at the distributed energy level, the payback for solar and batteries combined will see new installs start to outstrip solar-only installations over the course of 2018 – and into 2019 no-one will install solar without a battery.

And while that’s quite a prediction, it’s not out of the realm of possibility.

Already, we have seen rooftop solar at its highest level ever – tipping more than 1GW in 2017 – and installers report interest is continuing to boom. And as Wills remainds, regardless of the technology – be it a TV set, car, mobile phone – change always comes faster than expected.

“So you can assume batteries will be faster. Continuous falls in battery cost reductions are consistently demonstrated and a high probability to continue.

“Novel applications of solar will start to emerge as we look for a generation 2 (and 3) to replace generation 1 solar modules,” Wills says. “The availability of Tesla’s solar tiles for roofs is the harbinger of the various announcements we should expect in 2018 – including more road surface trials and see through solar glass products to the 3d printing of solar product …. And perhaps some decent amount of solar glass on cars.”