On the same day Tony Abbott described Australia’s RET as “not the right way forward,” a new report has described renewable energy targets as a “defining feature” of the global energy landscape, with 164 countries adopting at least one type on RET, up from just 43 countries in 2005 – a fourfold increase.

The report, Renewable Energy Target Setting, launched by the International Renewable Energy Association at its ninth Council meeting, finds that developing and emerging economies are leading the adoption of renewables targets, accounting for 131 of the 164 countries to have adopted them. 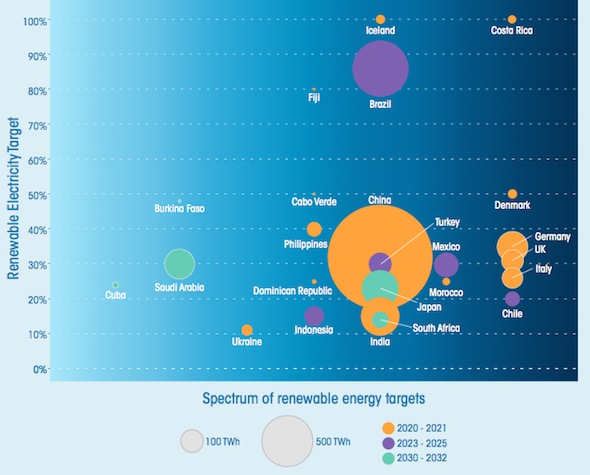 And while the majority of countries focus on the electricity sector – 150 countries have renewable electricity targets – commitments in other sectors are also on the rise, the report says.

“Renewable energy targets have emerged as a popular mechanism to set national and regional economies on the path towards a more secure and sustainable energy future,” said IRENA Director-General Adnan Z. Amin.

“They provide an important signal to the industry and can help to align stakeholders by creating a clearer, common vision for the development of the energy sector.

“The rapid growth of targets is just one more signal of the world’s ongoing shift towards renewable energy and away from fossible fuels.”

Meanwhile, in Australia, legislation to cut the federal RET from 41,000GWh by 2020 to 33,000GWh is awaiting passage though the Senate – probably some time next week – having passed the House of Reps without debate.

And while the Coalition government has claimed that this will not amount to a reduction of the original 20 per cent target, but an increase to 25 per cent by 2020, that position has been directly contradicted by comments from the Prime Minister on Thursday.

In an interview with Radio 2GB’s Alan Jones on Thursday, Abbott said Australia’s RET had been “put in place in the late days of the Howard government” and “knowing what we know now I don’t think we would have done things this way, but at the time we thought it was the right way forward.”

As for the 33,000GWh RET amendment, the PM declared that for what it is: as a “capital R” Reduction.

“What we are managing to do through this admittedly imperfect deal with the Senate is to reduce the growth rate of this particular sector as much as the current Senate would allow us to do,” he said.