Scientists at SLAC and Stanford University have set a world record for energy storage. The innovative design stores five times more energy than commercially available battery storage technology, additional tests show that the system maintained a high level of performance after 1,000 charge/discharge cycles. This is an exciting development as it paves the way for longer-lasting, lighter batteries for portable devices and electric vehicles.

At the present time batteries are made of lithium ions, they work by moving the lithium ions between two electrodes (cathode and anode). When charging the battery all ions and electrons are pushed towards the anode, when using the battery the ions and electrodes are move back towards the cathode. The long term performance of today’s batteries is typically reduced to around 80 percent after 500 charge/discharge cycles.

Researches have known for some time that sulphur could potentially allow more lithium ions to be stored, and therefore more energy than the current chemical compositions. However, there were several issues that scientists had to overcome as a result of the chemical reaction between the lithium ions and sulphur cathode.

The breakthrough made by scientists was to develop a cathode made of nano particles, these consist of a ‘yolk’ of sulphur surrounded by a porous ‘shell’ of titanium-oxide. The addition of the titanium-oxide protects the sulphur from dissolving, while the space between the ‘yolk’ and ‘shell’ allows the expansion and contract of the sulphur cathode without cause damage. What made this process more impressive is the scale at which it has been developed, each cathode particle is 800 nanometers in diameter which equates to one-hundredth of the diameter of a human hair. 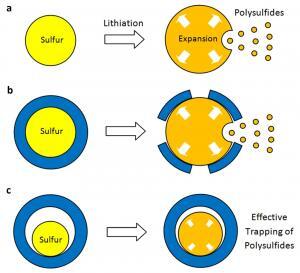 The lead researcher of the project Yi Cui, a Stanford associate professor of materials science, said of the breakthrough:

“This is the highest performing sulfur cathode in the world, as far as we know, even without optimizing the design, this cathode cycle life is already on par with commercial performance. This is a very important achievement for the future of rechargeable batteries.”

Since 2005 Cui’s research group has developed a series of increasingly efficient anodes using silicon as it can store up to 10 times more charge per weight than a carbon equivalent. The future research goal for the group is to combine the sulphur cathode with a silicon anode (both utilising the yolk-shell design) to investigate whether this will produce a high-energy, long-lasting battery.

As the technology is still at the research phase there is no expected time scale for commercial availability, but this development is an important step towards answering some of the criticisms of today’s electric vehicles.