New research has shown that the fast-growing Australian solar industry is both creating jobs and pushing down electricity prices, despite claims to the contrary from power networks and the fossil fuel lobby.

A report, released on Monday by The Australia Institute, found that the nation’s solar PV industry now employs 13,300 people, which it says is “far more” than the number employed by coal-fired power stations.

It also confirmed that renewable energy was holding down the cost of electricity – a fact that even federal government commissioned modelling has corroborated. 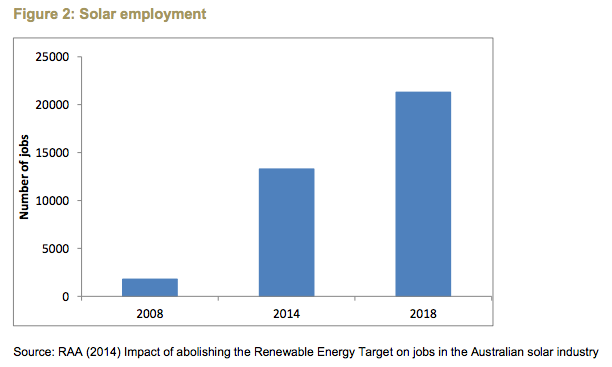 “Even the modelling commissioned by the Abbott Government’s inquiry into the Renewable Energy Target, chaired by Dick Warburton, found that renewable energy is holding down the cost of electricity” said Richard Denniss, executive director of The Australia Institute.

But Denniss also warned that the success of solar PV in creating jobs and lowering electricity prices had driven the existing energy industry to seek protection from renewable energy through regulatory means. But despite this, and the obstructive efforts of the Abbott government and the fossil fuel industry, Denniss said the energy market would continue to undergo rapid structural change, driven primarily by technological change, consumer preferences and rapid shifts in relative energy prices.

“Ten years ago gas fired electricity was seen as a ‘transition fuel’ which would smooth the shift from coal fired power to renewables,” he said.

“The rapid decline in the cost of renewable energy, combined with the expectation that the wholesale price of gas will double or treble when gas export facilities are completed, has fundamentally changed the underlying economics of the Australian energy system.”