DNV GL have published the 2018 results of their solar panel reliability testing for this year, with the 2018 PV Module Reliability Scorecard published in late May this year. The company’s annual report is fast becoming a complementary (or alternative) measure of solar panel quality to commonly used ‘tier ranking‘ systems (mainly the one created by BNEF).

So which panels performed the best in the 2018 report? We’ve summarised (and explained) the results below. 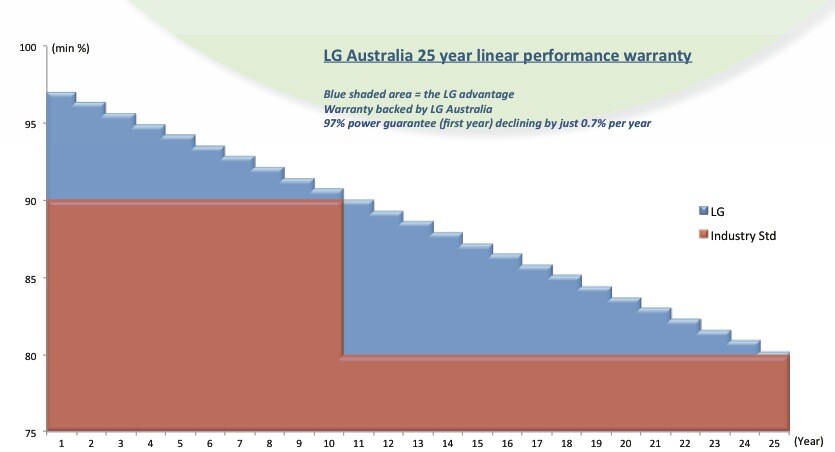 Additionally, they ensure that the modules they are testing are not ‘golden panels’ handed up directly by the manufacturer specifically for testing purposes, but rather ones randomly selected from the factory by DNV GL themselves or by their agents.

What are the test sequences?

As solar panels heat up and cool down, they expand and contract, which can affect the way that the components inside are held together. The thermal cycling test sees the panels sit in temperatures of -40°C to 85°C 600x times. This is well beyond anything panels are likely to face in the real world, but the whole point is to create an environment of accelerated stressing – so if they do well here, they’re likely to also perform well in real life.

Hot, humid conditions can be bad for panels not constructed to withstand them, resulting in the various layers of materials (glass, silicon cells, etc) to become ‘unglued’ from one another. DNV GL subject the panels to about 42 days’ worth of 85% humidity at 85°C. According to the report: “While high temperature/high humidity occur regularly in many parts of the world, the damp heat testing sequence is effective at uncovering degradation and failure modes associated with long term exposure even in moderate climates.”

According to the report:

For the DML test sequence, the module is installed according to the manufacturer’s recommended mounting configuration and is subjected to 1,000 cycles of alternating loading at 1,000 Pa. During the test, DNV GL monitors continuity of the module’s electrical circuit and leakage current to the module frame. After an interim characterization, the module is stressed in chamber for 50 thermal cycles to cause microcrack propagation before undergoing 10 humidity freeze cycles to fully realize the potential power loss. The 2018 PQP extends the humidity freeze cycles from one set of 10 cycles to three sets of 10 cycles.

Potential induced degradation (PID) is a technical issue with solar panels that probably makes the least intuitive sense and seem the most abstract to people in the market for a solar PV system. Basically, it has to do with electrical grounding configurations and does not apply to all panels or all all solar system setups.

During the test, a voltage bias equal to the system voltage rating of the module (either -1 kV or -1.5 kV) is applied under 85°C and 85% relative humidity conditions for two sessions of 96 hours. This accelerated environment provides the temperature, moisture and voltage bias conditions necessary to evaluate degradation related to increased leakage current.

It should be noted that there are reversible and non-reversible PID mechanisms. Electrochemical corrosion and some sodium ion damage to the PN junction are widely considered irreversible, while PID due to the accumulation of static charge on the surface of cells, also known as polarization, can be reversed. 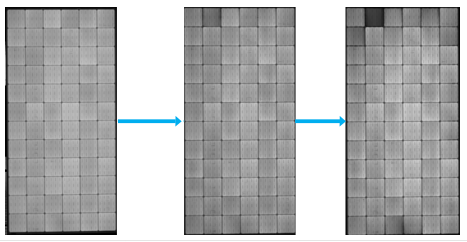 Results from the 2018 Reliability Scorecard

It’s important to note that this is an incomplete list – not every solar panel available in the world is tested by DNV GL. This goes for both high-end manufacturers as well as a number who would be classified as ‘tier 3’. That being said, the company says that about 70% of the world’s largest manufacturers are represented in the results.

Each year the modules and brands tested for DNV GL’s Scorecard can change – new ones enter, old ones leave the testing regime and still others may not have their names mentioned due to failure to achieve ‘Top Performer’ status.

That being said, the ones who have made the ranks for the four years straight that DNV GL have been publishing the Scorecard results have something worthy of bragging about – arguably more noteworthy than achieving BNEF ‘Tier 1’ manufacturer status. To date, these are Jinko Solar, Trina Solar and Yingli Solar.

All in all, the DNV GL results are a good reference point for solar panel quality, to be considered in conjunction with other systems like BNEF’s tier rankings as well as factors such as the company’s service presence in the country of purchase (Australia, in our case). 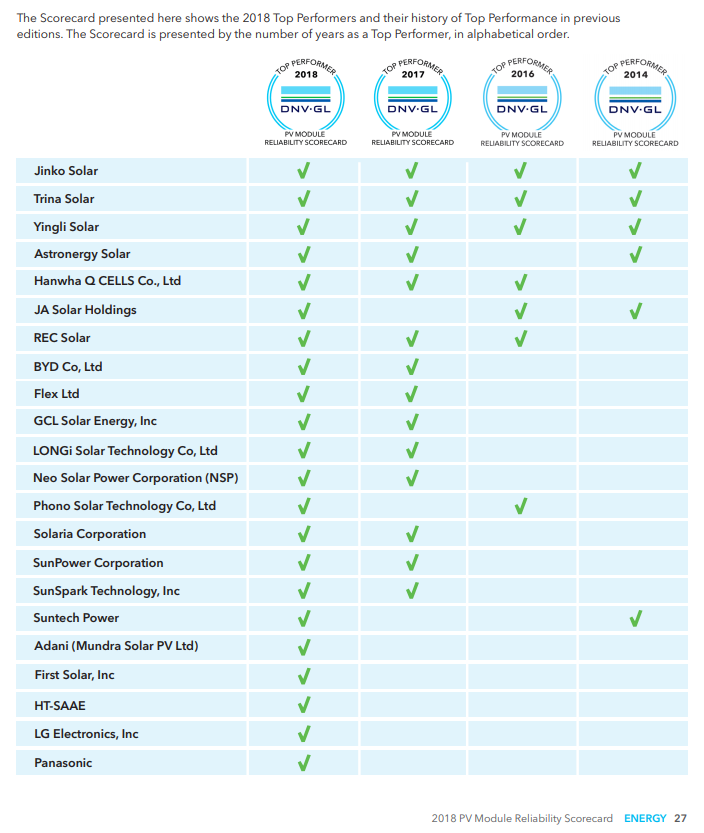