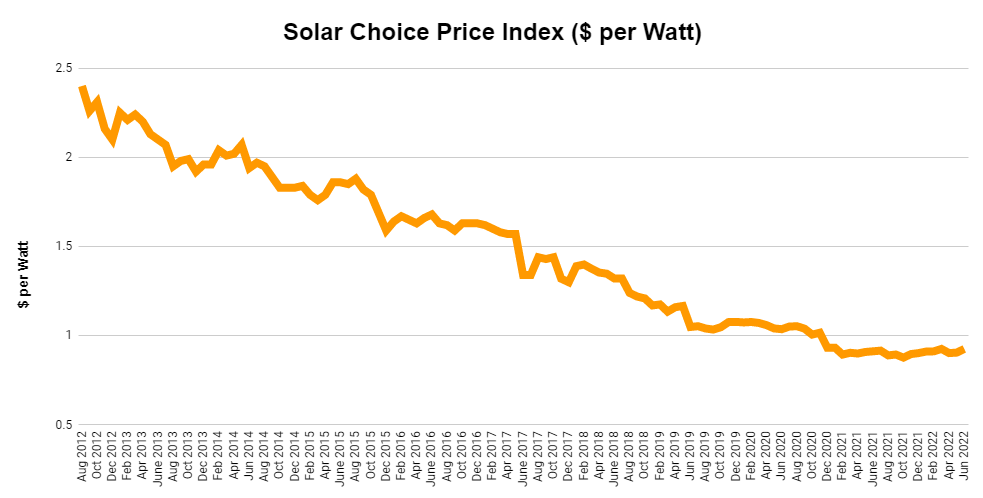 Solar Choice has been publishing the Solar Price Index for residential solar & commercial-scale solar since 2012 and 2014, respectively. We regularly compile pricing & product and warranty information from our pre-vetted network of over 200 installers to produce the Residential Solar PV Price Index and Commercial Solar Price Index. We update this information monthly to help Australians understand – how much does a solar panel cost?

Our price index is used frequently as a benchmark to residential customers and businesses as Australia’s best guide on how much solar panels cost and is included in reports derived by industry experts such as SunWiz and Bloomberg NEF.

The below table shows average solar panel costs by city & size of solar panels installed (DC). The prices in all the below tables include both the up-front incentive available for small-scale systems through the Renewable Energy Target (i.e. ‘STC discount’) and GST – they represent the total retail price of the system to the customer.

History of solar prices in Australia

Prior to the solar boom in 2008 solar power prices were as high as $15 to $20 per watt and was really only taken up by the early adopters with greater financial means.

Solar took off in 2008 and 2009 as the government introduced premium feed in tariffs which offered up to 60 c/kWh for solar energy exported into the grid. This attracted a lot of customers and installation companies to the market and ultimately all the schemes in each state were closed ahead of schedule around 2011 to 2012.

In 2011 the government introduced the federal rebate program which provided (and continues to provide) a significant contribution to the upfront cost of a solar system. At the same time product manufacturers were started to reach significant economies of scale and implementing robotic-automation in factories to steeply drive down the underlying cost of solar panels and solar inverters.

The below average solar costs are for offers that each installer considers to be their premium offer. Solar installers generally have tiers of offers to cater to consumers on a budget, or consumers willing to pay more for higher quality to products. The premium offers listed on Solar Choice’s quote comparison tool generally feature longer warranty periods, better product technical capabilities and are manufactured by the most reputable and trustworthy brands. As can be expected, these systems come at a 20-30% higher price tag based on the average prices published on this page.

To give an idea of what is considered a ‘premium’ solar panel and solar inverter see the below pie charts which displays the most popular brand names that installers are including in their premium option. Note that the most used premium solar panel or inverter is not necessarily the best quality, it is simply an indicator of market share. 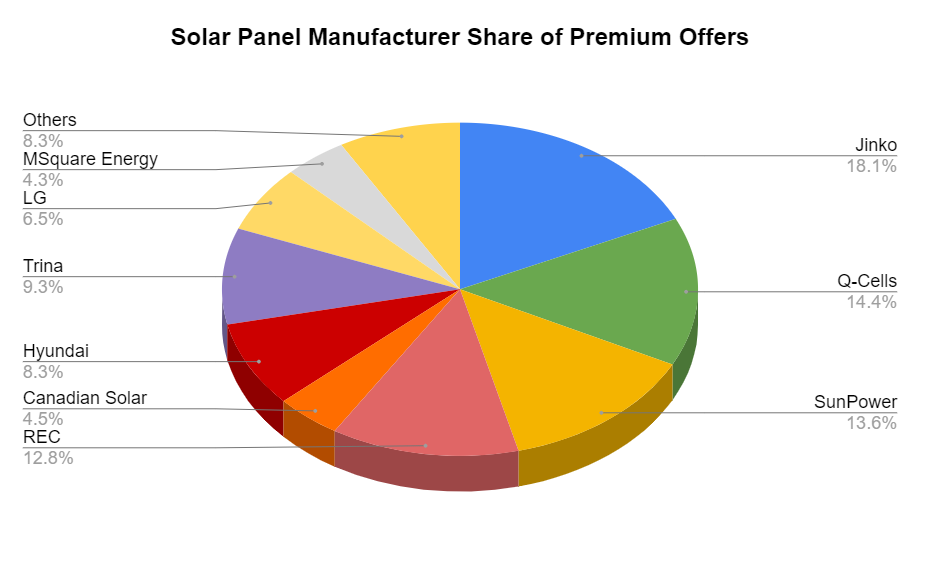 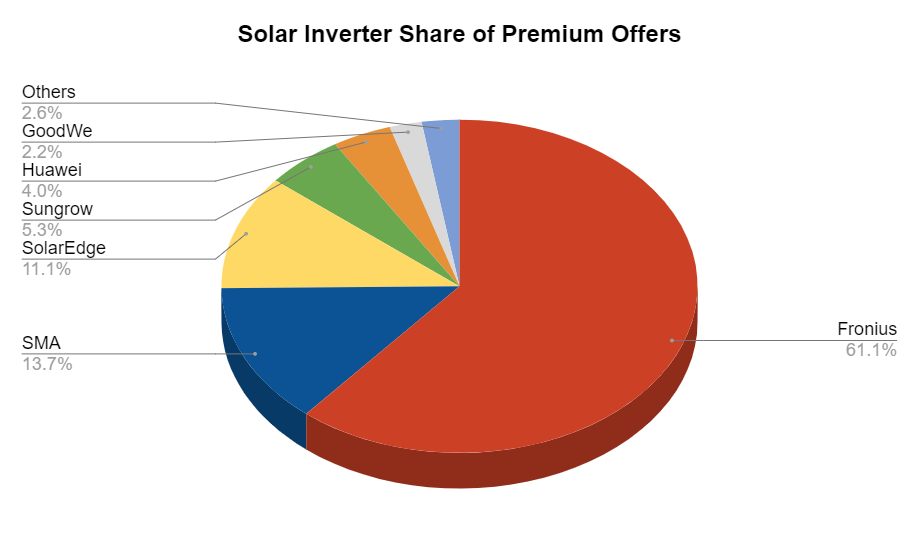 Four important factors that influence the cost of solar panels in Australia: 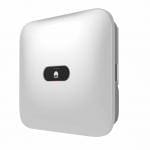 The primary driver of the decreases in the cost of solar over the last decade has been the economies of scale reached by the Solar Panel and Inverter manufacturers predominantly in the Asian continent. As a young industry, factories have been able to automate processes, increase manufacturing and logistics scale and dramatically reduce the cost per watt of a solar installation. Many installers have now reached a volume where they can purchase Solar Panels and in some cases inverters directly from manufacturers which enables them to lower prices further. 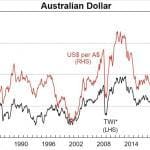 Most components for a solar system come from overseas. As a result, the price of solar reflects the ability of the Australian dollar to acquire equipment, either directly as installers negotiate with manufacturers or passed on through Australian equipment wholesalers. For this reason, solar quotes will often have an expiry date of 14 to 30 days to ensure that installers are not at risk if equipment costs change.

The federal solar rebate – STC program – winds back each year until it is phased out completely in 2030. This provides upward pressure on solar pricing but has been overshadowed in the past years with the cost of solar decreasing. That is beginning to change as is shown in the graph above, as we’ve seen solar prices trend sideways.  The introduction of local solar rebate schemes in particularly states has also had a dramatic effect on the cost of solar, particularly in Victoria. 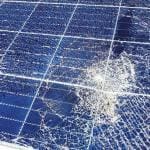 The solar industry is one of Australia’s most competitive markets with over 6,000 contractors accredited with the Clean Energy Council to install solar. As a result, the margins have been forced to be very slim in the market. Unfortunately, this has driven some installers to sacrifice the quality of product and service to offer ‘crazy prices’ and support them with large marketing budgets to drive high volumes. These tactics have provided downward pressure on pricing, but in most cases have not improved the outcome for consumers.

What about solar panel costs in the future?

Many people in the solar industry expect the price of solar systems to continue to decline, albeit at a much slower pace. Manufacturers continue to progressively release improvements in cell efficiency and panel designs which are now edging leading Solar Panels towards 1,000W of power. However, a lot of the early step change efficiencies of production have already been achieved in robotic-driven factories of enormous scale. Additionally in Australia the STC rebate reduces each year until it is scheduled to phase out completely in 2030. This upward driver in solar prices has led to pricing level out over the last 12 months which can be seen in the above graph. Since May 2014, Solar Choice has been publishing commercial-scale solar PV system prices for each of Australia’s capital cities across a range of popular system sizes. The data we use comes from our installer network database, which consists of about 150 reputable solar installation companies around the country. Companies in our network upload their pricing & product information for us to present to our commercial clients in our free & impartial quote comparisons so that the client can make an informed decision about who to pursue further discussion with.

Solar Choice manages tenders for a wide range of commercial solar projects around Australia. The figures in the tables below are based on data from our extensive network of solar installers, many of which specialize solely in commercial-scale solar projects.

All prices in the tables below include incentives available through the federal Renewable Energy Target (i.e. STCs) as well as GST.