Rooftop solar might have become a less attractive proposition for businesses in South Australia, after electricity consumption rates for business owners were slashed by SA Power Networks to one-fifth of their previous cost.

The decision by SA Power Networks to slash the electricity usage component of its network charges to just 3.3c/kWh, compared to 16.4c/kWh for peak usage under the old tariff, and impose hefty “demand charges” is part of a range of measures taken across the country that the solar industry says disadvantages rooftop solar.

But the changes could also serve to provide added incentive for consumers to adopt both solar and battery storage, reducing their reliance on the grid.

Last month, SAPN sought to impose a special fee on solar households equivalent to $100 a year, although this was rejected by the regulator. Across the country, fixed tariffs are being increased, demand charges introduced, and special metering fees added which increase the cost of solar installations.

Elsewhere, the price paid for exports of solar output back to the grid are being slashed – even though the significant value of rooftop solar is being recognised in the US – and in some cases solar systems are not allowed to export into the grid.

The SAPN changes, which came into effect on July 1, introduce a new tariff and metering system for businesses using more than 160MWh a year, although the new tariff design may be progressively introduced to small business users and households.

SAPN says the new tariffs are part of the new “cost reflective” tariffs that are being encouraged by regulators. But the solar industry says that in many cases the notion of “cost reflective” is turning into a meaningless label and is being used simply as a grab for revenue. 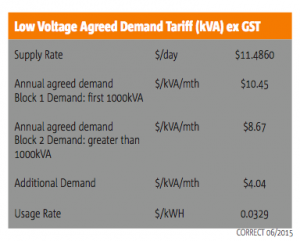 The new supply charges (see table above) translate to a minimum bill of around $4,100 a year, just for connection. That is nearly three times the previous fixed supply fee, according to installers.

But while solar-only installations may now look much less attractive, solar plus battery storage is starting to look much more interesting, because the solar output can be stored to ensure that the demand benchmarks are not exceeded, although this will depend on the usage patterns of the household or business consumer, and on the set-up of their solar and battery storage installations.

SAPN, in its explanation to consumers, says that the demand charges are designed to try and reduce the size of the “highway” needed to meet peak demand. It compares the grid to a 10-lane highway built to meet peak demand. Only two lanes may be used for most of the time, but the full 10 lanes for just a few hours on just a few days a year. The network is built – and the costs paid by consumers – on the basis of these few hours.

SAPN says solar PV and battery storage may reduce the level of demand reached at a consumer’s site, but may not be able to be relied upon to consistently lower levels of demand.