Queensland burgeoning number of solar households could play a major role in the outcome of last weekend’s state election, according to research released by Solar Citizens this week.

The data, compiled by Sunwiz from Clean Energy Regulator records, show the percentage of solar households exceeds the margin for the electorate in the vast majority of Queensland seats.

In Premier Campbell Newman’s own electorate of Ashgrove, which the LNP held by a margin of just 6 per cent, 10 per cent of residents (or 17,615 households) have a PV system on their roof. (Update: In fact, the Premier lost his seat.)

“The Newman Government squaring blame on solar owners for the rise in power bills has been misguided to say the least,” said Solar Citizens national director Claire O’Rourke in a statement just before the election.

“Not only did it show he was out of touch with what Queenslander felt they must to to reduce their power bills, it may have critical repercussions at the ballot box.

“About 33 per cent of Queensland homes now have solar installed on their rooftop and we know many more are keen for support to go solar and cut their household energy bills.”

This disconnect between the LNP, voters and other parties on solar is also reflected on the Solar Citizens’ Solar Scorecard, also launched this week.

The Scorecard rates the state’s major parties’ solar policy based on their responses to questions on the five key issues facing solar in Queensland: a fair price for rooftop solar, feed-in tariffs, energy storage and the RET.

“Overall, Labor, The Greens and The Palmer United Party made positive responses to solar policy questions we put to them,” said O’Rourke.

“They all have clear plans to support solar and solar homeowners in the Sunshine State.

“However the policies from the Newman Government are bitterly disappointing. ….By refusing to commit to a fair feed-in tariff, or to protect solar jobs and the Renewable Energy Target they are alienating voters and missing an opportunity to help people take control of spiralling power bills.

O’Rourke notes that the most recent data indicates there are more than 420,000 solar households in Queensland.

“The next State Government is responsible for making sure solar and other renewable industries are supported so household power bills come down and new investment and jobs in these promising industries are created for Queensland.

“Solar Citizens urges all candidates contesting the Queensland election to put the support of households who want to benefit from generating their own clean solar energy front and centre in the final days before the poll.” 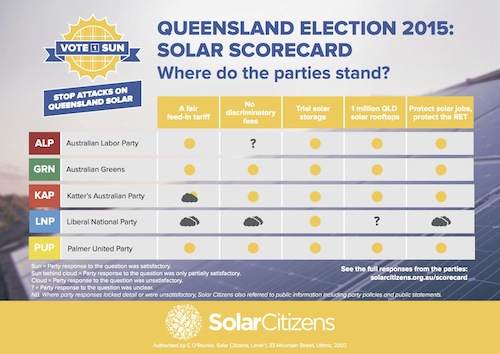 Solar has indeed been a red hot political issue in the Sunshine State over the past few years, and a dangerous game for the Premier.

Nearly two years ago, concerns were raised in industry circles that the Newman energy policy cocktail – a combination of state subsidies on electricity use, price freezes, tariff designs that add fixed costs, and demonising new technology rather than embracing it – would accelerate a spiral towards stranded assets rather than an efficient network.

Among voters, meanwhile, his policies have more broadly been perceived as an attack on the nearly one-third of Queensland home owners who are trying to save money by installing solar.

Labor and the Greens have tapped this zeitgeist; the latter launching its Queensland election campaign with a promise to remove barriers to installing rooftop solar, and to spend up $170m on research, solar loan mechanisms and initiatives to install PV on public and low-income housing.

Labor has been a bit more vague, with promises from leader Annastacia Palaszczuk of one million new solar rooftops and a fair price for solar. 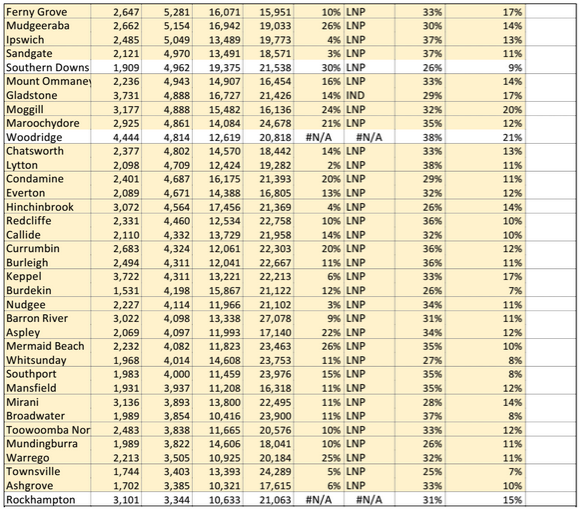