The electrical energy output of solar cells is obviously one of the crucial things that you need to know when looking to install a solar system. Some solar energy companies are giving a wide variety of unreferenced numbers, so we have done our research and provide you with fully referenced and reliable information for you to consider.

What is solar panel output?

The power rating of your system (stated in kilowatts, or kW) is a measure of how big your generation system is, not how much energy it will produce. This is analogous to a car engine, where the size of the engine gives you an indication of how powerful it is, but does not itself tell you how much petrol it will use, although the two are related.

In addition to knowing the output rating of your solar power system, you should also understand how many (kilowatt-hours or kWh) your solar system can be expected to produce. Knowing this number will help you calculate the revenues and savings you can expect to receive from your solar panels.

Of course the first factor influencing how much electrical energy you will generate is the size (otherwise known as rated power) of your solar installation. A greater umber of solar panels will produce more electrical energy (just as a bigger car engine has more grunt).

The amount of sun your solar cells are exposed to (and hence how much energy they will generate) depends upon:

If we exclude the first two factors, which you have a degree of control over, your location in Australia is the primary variable dictating how much energy your cells will produce. In most cases southern parts of Australia will receive less total hours of sunlight that northern areas. Hence, a 1.5kW system in Melbourne will typically not produce as much electrical energy over the year as the same system in Alice Springs.

Fortunately, studies have been conducted that take all of the above factors into account and give the average energy output for solar cells in locations around Australia. These figures are given as:

The amount of electrical energy (kWh) a 1kW grid connected solar PV system will generate on an average day (kWh/kWp.day).

The most comprehensive source of this information is the Clean Energy Council (the body that the Australian Government charges with accrediting solar cells, inverters and installers): 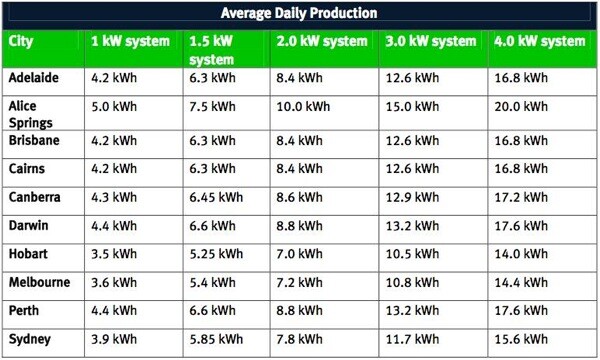 Researching this topic will reveal other credible sources, with slightly different figures. The USA’s National Renewable Energy Laboratory’s (NREL) PVWatts tool also works for Australia (using Aussie meteorological data) and is a great resource for plugging in numbers and estimating a solar system’s output. We encourage you to check it out.

Some exploration will reveal that it’s not quite possible to put an exact unequivocal figure on the energy you will produce from you solar cells. Indeed, as Dr Anna Bruce, Lecturer at the School of Photovoltaic and Renewable Energy Engineering at the University of New South Wales informed us, different solar systems both rated at 1kW sitting side by side may produce different amounts of energy due to the quality and efficiency of their components, how the grid is functioning and how well your system deals with high temperatures. Her expert advice is that “4kWh/kWp.day in Sydney is certainly feasible if a system has optimal tilt and orientation and is running well”.

So the Clean Energy Council figures above act as a good guide and are one of the best and most comprehensive sources available, however due to the nature of solar, your system may produce more, or a little less than the figures given.