The International Energy Agency (IEA) has released their ‘2014 Snapshot of Global PV Markets’ report. The published figures state that, as of the end of 2014, there is now a cumulative total of 177 gigawatts (GW) of PV capacity installed worldwide. In 2014 alone there was at least 38.7 GW of PV installed*.

Highlights from the report are listed below:

Assuming the same amount of PV is installed worldwide next year – which is a fairly conservative assessment – then the projected cost of PV based on historical learning curve data should drop to below US$0.55 per watt on average. 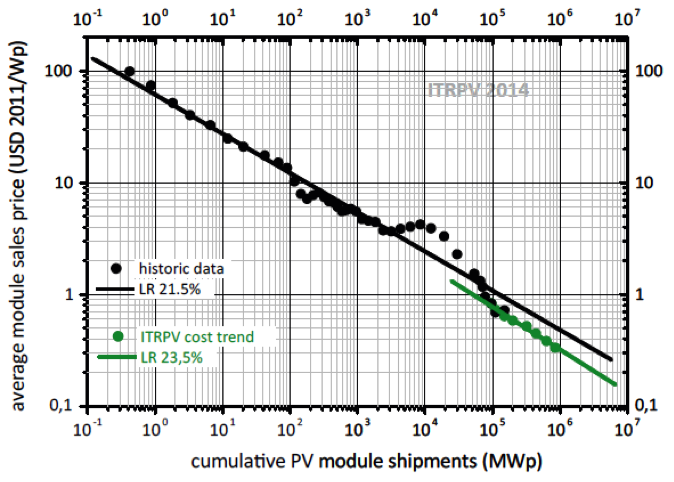 The ITRPV learning curve for the cost of PV modules. [Image Source: ITPRV]

Our local PV market is punching well above its weight despite having little to no regulatory support from the Australian government, ranking in the top 10 worldwide in both yearly and cumulative install numbers. Given the strong public support for solar and renewable energy, there’s every reason to predict more growth in the Australian market.

*This is a preliminary total. Final figures from the IEA could potentially reach 40 GW installed in 2014.